Just a quick note to thank y’all for the prayers and well wishes. What began on Wednesday last week, seems to be tapering off. Sunday and Monday, I had the nasty cough, and really bad allergies. I got a pretty good night’s sleep last night, and I’m not coughing so much. Even my allergies feel manageable. I’m on Sudafed (doctor ok’d it), and I don’t need to walk around with a box of kleenex anymore.

I’m watching Caley for a bit this morning, then Amy, the kids and I will go see Kirsten & her new daughter. I’ll bring my camera and try to take a picture. For the curious, Kirsten’s daughter has a gaelic name (her name is Niamh, pronounced “neeve”), which she tells me is the most popular name in Ireland right now. So while it seems odd here in the U.S., when they move to Ireland in 4 years, she’ll fit right in.

eh. cough cough. I still have a nasty cough, and my face hurts. But I was able to get some sleep and the coughing was at a minimum. Yay God! Thank you for hearing my prayers. Obviously I don’t plan to bring my germs to church, but that also means not bringing my germs to the pool. I hope to improve ten fold by tomorrow, as I am stopping by Kirsten’s, and would love to see the new baby. I may end up just seeing her front porch.

This weekend’s snow didn’t add much to the piles, just added slickness to the icy ruts on the street. Yuck. We’ll (hopefully) get some sun the next two or three days to melt some more before we get an ugly storm blow in Thursday.

Gonna spend the day looking at the bright side of life.

Yesterday I had a cough, sore throat and a general ache-iness. As a result, I missed out on celebrating Caley’s birthday (but the boys went). Today I feel even worse. It took forever to fall asleep last night. My indigestion was so painful, and it would trigger big coughing fits. At one point I tried to sleep sitting up, but it was so uncomfortable. I just wanted to cry because I was tired and couldn’t sleep. Eventually I did sleep, though not great.

Tonight we’re touring the hospital, and I have a few small errands to run during the day. Then I plan on staying inside and resting. This really sucks because Kirsten invited me over to meet her baby. And I certainly don’t want to expose them to whatever I have.

The weather this week has been sunny, and we’re getting a lot of melting. I like to go outside and just stand in the sun. Oh yeah, we’re expected to get snow this weekend, but I’m not sure how much. I don’t even trust the meteorologists, since they screwed up last week and said it was going to be no big deal.

Anyways, please pray for healing, and that the boys don’t get sick. I’m going to have a cup of tea. I’ll close with a quote from Phenomenon.

George Malley: This is good, Lace. I think you’re a good cook.
Lace Pennamin: No, I’m not. I only make two things pretty well: pork chops and, um, turkey.
George Malley: Hm. Which is this? 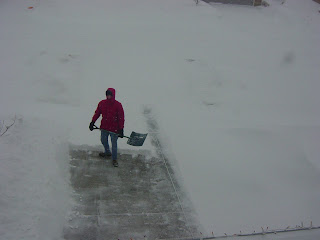 It’s funny to look back at my last post and see that we thought we were only getting a few fat flakes. Ha ha ha. The weatherman was way wrong, and we ended up seeing between 6-9 inches. Geoff had to go out twice, just to stay on top of it. sure could have used Lexi this weekend. As a result of the crappy weather, we didn’t make it to church, we didn’t go swimming, and I didn’t get to go out with Amy. But, we did enjoy a lovely pork chop dinner (Tyler’s recipe) and a chocolate pound cake.

Frustrated by my inability to get the mail without walking onto an icy street, I ratted out one of my neighbors to the HOA. Will their sidewalk get shoveled? I’m not holding my breath. I can deal with a front street that it one rut after another, I HATE not having my sidewalk.

We won’t get a reprieve from the weekly snowstorms until the dumb jet stream moves.

I have hundreds of photos in shoeboxes, which take up space in my closets, so when I got a Target gift card for my birthday (thanks Athena!) I bought some photo albums. I spent the weekend going through the photos and was able to get all the photos from our life in Edmonton in an album. Whoo-hoo! Now I’m working on California life. So the stocking project has not been started. But I’m happy to see this project making headway.

Yeah I’m nesting. I know. But really, having stuff organized bugs me all the time. It’s just with a new one arriving soon, I want to tackle things I know I won’t want to in the coming months. Like filing, and trips to Goodwill.

My friend Kirsten had her baby last week. I’m waiting to hear back from her on the name they settled on, but it was a healthy baby girl, 8lbs 6 oz. Her doctor said she’d be early, but in actuality, she had her the day after her due date.

Another gift I got for my birthday was Lady In The Water. We watched it this weekend. It was good, it was very M. Night. So if you aren’t a fan, I don’t know that you would like it. I’ll close with a quote from it. 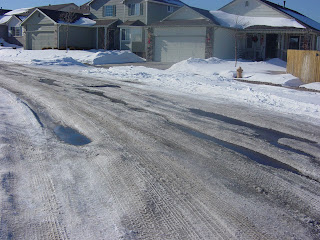 Just wanted to let you know that yes, for the 5th week in a row, we got snow. But it didn’t add up to anything. It was just fat flakes. We’ll get more of them tomorrow too.

Above is a picture of the front street. Do you see what I see? Pavement! The ruts have reached pavement! The snow still probably won’t be all gone until April. That’s my guess. Here’s how tall it still is on the front lawn. 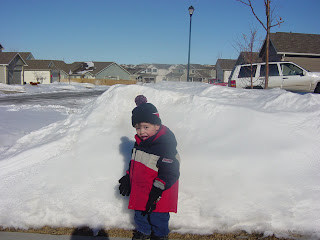 Since I have a doctor’s appt today, I plan to try and get some errands done with the car. I almost dread doing errands, I end up having to go to 3 or 4 places. Wouldn’t be so bad, but then you add getting a toddler in and out of a car seat, in and out of a building, and it makes for a long day. Wouldn’t it be great if I could just go one place and have it all there? But I’m sure if the world was like that, it would be a dull place, and people wouldn’t interact with each other nearly enough.

We had such a lovely visit with Lexi, and all of us were sad to see her go. Monday night, Elijah said “Lexi bye bye”, and we told him, yes Lexi went bye bye. We mostly hung around the house, played games and ate yummy food. She said she can’t wait to come back.

The snow last weekend was pretty tame, compared to the previous 3 weekends. This may be the first Friday in forever we don’t get snow. That snow (coming from Canada, thanks a lot), if it shows up, won’t be until early next week. All 3 of us are anxiously awaiting the day (or month) when we can get out as a family.

I’m going to close with a quote from Futurama.

Bender: I’m really starting to swell up with beer. I must look ridiculous.
Fry: Nah, you have a healthy glow.
Bender: [Bender belches] Oh my god! I just felt it ferment!
Fry: Ooo! Let me feel.
Leela: Have you thought about what to name it?
Bender: I was thinking Benderbrau if it’s an ale, Botweiser if it’s a lager.
Fry: I hope it’s a lager so I can take it to a ball game.

I had a good, but uneventful birthday. Thank you to everyone who sent cards, gifts and well wishes by phone, email, and blogs. Didn’t do anything special, but we’ll go out to dinner with Lexi this weekend, and I’ll get her & Geoff to bake me a cake. Plus I can always do something at a later date (when there is money and possibly a babysitter). 30 doesn’t feel so different.

The snow started late Thursday night, but there wasn’t much of it. They expect a few inches each day. The change from past storms is that the temperature is pretty low for us. It’s not Canada-low. But we’re in single digits and negative temperatures at night. Currently it’s -8 F, which is -22 C. At least I can look back at when I was in CA a few weeks ago, and walking around in my t-shirt. I think maybe I need to plan on going somewhere warm every January.

House was good this week, and I was super annoyed to find out it’ll be 3 weeeks for another new episode! That’s just mean. Thankfully I got season one on DVD for my birthday, so I can overdose on it if I choose.

Lexi got in alright last night, and I have to make sure I take some pictures. She’s excited about the snow and cold, she says it’s a welcome change from sun all the time. Silly Californian.

I’ll close with a quote from last night’s repeat of Psych. 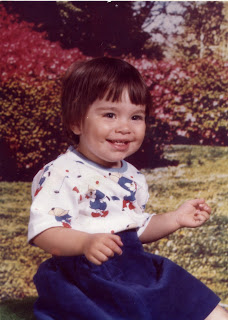