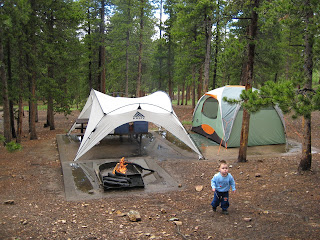 When the Armstrongs camp, you must anticipate the unexpected. You can count on rain for one thing. This trip lived up to that, and then some. We arrived Friday around 12:30, and the rain had just started. The kids and I stayed huddled in the car while Geoff set up the new shade. Thankfully the neighboring campers helped him erect it, and we were able to go out underneath it and help with the tent. It was a light rain, so not yet unbearable. Once the tent was up, and the car pretty well unpacked Geoff left to go buy some wood. At this point the rain had begun to beat down hard. I went into the tent to set up, so the kids could have some place dry to play. Then the hail hit. I called the boys to come into the tent. We huddled inside while lightning crackled right above us. It was unbelievably loud, nearly frightening me, but not Elijah or Miles. It must have lasted at least 15 minutes, before it went back to rain. Geoff returned to a very damp site, puddles everywhere. With his mad fire-starting skills he got a fire going. The sun eventually returned but we had to try and dissuade the kids from soaking their shoes in the puddles (we were unsuccessful).

The big reason we like site 91 is because it backs into a wooded area, giving the boys a lot of room to run around and explore. Even the sites on either side aren’t very close, so it affords us privacy.

Chad & Khara (along with pup Kona) arrived around dinner time, and thankfully it was a quick dinner to throw together. We made flank steak fajitas. Kona loved having the puddles to lie down in. We were all a little concerned about being warm enough throughout the night, but only the girls and the dog were chilly.

Saturday morning, we woke to a sunny morning. Following breakfast Geoff went on his trail run, and we walked up to the amphitheater. I was able to check out the inside of the cabins & yurts (for future reference). That short walk was all Miles wanted to do, so we headed back to camp. The kids played and napped a little and us grownups played some crib (Jen & Cate-I didn’t win!). We had some lunch once Geoff got back. We hung out at the campsite the rest of the day, most everyone had an afternoon nap, save for Chad & Geoff. Chad made baked potatoes and kababs for dinner. Naturally dessert was the same as the night before, marshmallows.

Sunday morning Chad made bacon, eggs and hashbrowns, and the Lockmans tore down their tent. We decided that we’d had enough of camping, with the boys being whiny and fighting over sticks. We packed up and went home a day early. It worked out well, since it allowed us the rest of the day to clean up from camping. We did stop by Panorama Point again, since it’s on the way out of the park.

3 days and 2 nights is a good amount of time with a 2 year old in tow. Perhaps next year will go smoother, weather wise and kid wise.

Pictures are on Shutterfly. 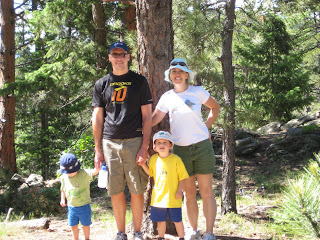 We did a 2+ hr hike on Mt. Falcon today for Father’s Day. The weather was warm, comfortable when the breeze picked up. But sure tuckered out me & the kids. Pictures are up on shutterfly. 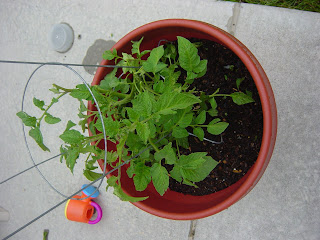 Sorry about the lack of posts. Part of it is laziness, and part of it is waiting for something to happen that is worth writing about.

Where do I start? Um, I made some new friends. I’ve been visiting the Mile High Mamas website for a while, and then there was a post about free zoo tickets. so I grabbed some and found out which other mamas were going and could we meet. I was so nervous, it felt a little like high school, would they like me? Would they already be clique-y? Well, they were awesome, and my kids were happy to meet new people too. *Pictures are up on Shutterfly*

Sunday Elijah was invited to Connor’ b-day party at Party On, where he climbed and explored in a few inflatable structures. He had a blast. While we there, Daddy & Miles were out shopping at REI & B&N. Meanwhile, our side of town was being pelted with golfball sized hail and a tornado touched down at Southlands. Now if you’ve visited us, odds are high we’ve taken you to Southlands, so you know the proximity we are to the mall. Our house saw little damage, we are having the roof inspected just in case. The only visible sign of a storm was the hail on the lawn and Lola took a hit. I think she’ll pull through she’s a tough little tomato plant!

Elijah is on his last week of school. I found out his teachers (all but one) are leaving to teach somewhere else next year. I’m happy he’ll still have one familiar teacher, and hopefully a few familiar classmates.

Our camping weekend is just 2 weeks away, and I was excited to hear that there are going to be 3 weekends this summer where National Parks don’t charge an entrance fee. I want to take advantage of that and Geoff is keen on trying to camp again this summer.

I’m off this morning to buy a wagon from someone off Craigslit. The kids feel in love with one when we were at the zoo, so I figured our best (and cheapest) bet was to get one second hand.