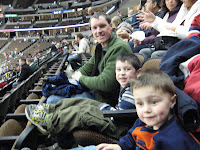 After living in Colorado for 6 years, we finally went to a Colorado Avalanche hockey game!

I was lucky enough to win four tickets, so the whole family went. We drove to a Park-n-Ride and met up with Daddy to take the train to Pepsi Center. Once we picked up our tickets at will call, we were surprised to see how awesome the seats were! We made our way there, and the kids were in awe. Daddy left to find food, and I explained to the boys which team we were cheering for. Elijah (4.5) pointed out everyone wearing hockey shirts, and when the zamboni came out, the boys cheered. Their excitement grew even more when a Chipotle burrito blimp appeared and floated through the arena, followed by a Denver Post blimp. They grew sad when the blimps finished dropping their coupons and disappeared, but by then Daddy was back with food.

The game started, and the boys continued to eat their cheeseburgers and fries. With the food done, they stood up to watch the game. Elijah declared his favorite number was 26, and that we were going to root for him (Stastny). After the first period Miles (2.5) was ready to leave, but I assured him there was more game to see, and hey the zamboni will be back. Thankfully there was also Mighty Mites hockey, little kids from Arvada playing on the ice. Elijah got a kick out of that.

Miles got antsy in the second period, so we took a walk around the arena. We made our way downstairs to the kids store, and picked up the boys some Avalanche shirts of their own. Miles proudly carried them back to his brother, at which point we put them on. 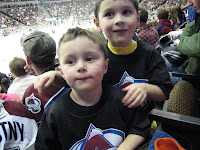 Elijah asked excitedly, “what number is on the back of my shirt?” Daddy explained that numbers cost more, but we can look into it for the future. Both kids were happy to have their new hockey shirts.

After the second period, we made our way to the exit, as Miles showed he’d had enough. One more burst of energy when we saw Bernie the Mascot, but the line was very long, and tears came when we wouldn’t stand in line. “Next time, okay. We’ll see Bernie next time.” The tears ended pretty quickly, and they had enough energy for the train ride back to the car.

I doubt we’ll ever have tickets so nice as these. It was a great experience for all of us, having been ages since either Geoff or I had been to a hockey game. The boys need to be a little older before they get into it, Elijah still complaining the game takes too long. But I’m thankful for the chance we got to go.

I know. I woke up on Thursday morning (reluctantly) and realized Wednesday went by without a post. And then I just didn’t care if I posted on Thursday.

I failed NaBloPoMo for January.

Rather than dwell on that, I’m gonna let it go.

Today is not a real post either. It’s mostly just an acknowledgment of my failure. 🙂

Tonight I’m excited that I’m going to my first Colorado Avalanche hockey game! The whole family is going, courtesy of tickets I won from Mile High Mamas. I had planned to get the whole family shirts to wear, but evidently no stores in my immediate area carry any. Or if they did, they were sizes way too large for us. So, my hope is to at least buy some shirts for the boys to wear.

At 4:30am this morning, I realized, I didn’t blog yesterday.

Today’s news: I woke to find out my nephew has pink hair! What?

He is participating in Hair Massacure 2010. People dye their hair pink, then shave it all off before Valentine’s Day to raise money for two great causes: Stollery Children’s Hospital Pediatric Oncology (in Edmonton) and Make-A-Wish Northern Alberta.

Let’s show some love to my 10 year old nephew for doing this, donate here!

I’m sure it is a documented fact that Melissa & “experimental eater” are not words often found in sentences. I even blogged back in November about my picky palate.

Reading through a Whole Foods newsletter, I was struck by the idea of eating sausage, beans & rice. I had never thought to try it before, and once I committed to the idea, I still wasn’t sure how it was going to be prepared.

I always cook my rice in my Zojirushi rice cooker (it’s awesome!). As for beans, I usually eat them from a can, and even then they are only ever red or kidney. When my husband suggested black eyed peas, I was a little frightened. What would they taste like? Would they taste like peas? Or worse?

To add further experiment to the dish, I picked up some andouille sausage at the meat department. Never tried it before, always a little afraid it might be too spicy. Which might scare me, but worse, might turn off Elijah, who won’t eat anything remotely spicy.

I left it to Geoff to find a recipe, and he did (thanks Emeril!). I left the entire dish to him to concoct, save the rice, which I can make. 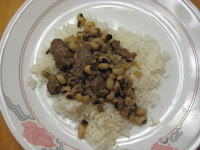 End results? Not bad. The first bite threw me a little, because I wasn’t sure what to expect. But I cleaned my plate, as did everyone else. A new dish to add to the recipe binder!

It’s winter here, so naturally my mind is already thinking about a vacation.

Actually part of me is still mad that this year’s vacation never happened.

December 2008, we started to form plans to do a family trip to DisneyWorld in January of 2010. We were going to have my brother’s family & my mom join us, Geoff & I were going to run the marathon & half marathon, and it was going to be wonderful.

But it never happened.

We registered for the race (with non-refundable race entries), I ordered Disney information, bought books & products to ready us for a family trip to DisneyWorld and spent HOURS on Disney websites.

Despite my brother’s family dropping out of the plans mid-January, I held hope that we’d still go with my mom.

Then hail trashed our roof and the roof needed to be replaced. Taxes needed to be paid. The car needed new tires.

The dream officially died by September. I pouted for a very long time.

There is a part of me, my cynical part, that thinks I should stop making plans, and dreaming dreams. Because money always seems to be a factor.

But the optimist in me, says without dreams, life would suck.

So I’m dreaming, of going somewhere this summer. Now I need to find a way to make my dream come true.

My heart is heavy for those suffering from the devastation in Haiti. I know it’s not much, but I donated a little to one of many charities pledging to help. I urge you to as well.

And above all, keep these people in your prayers. 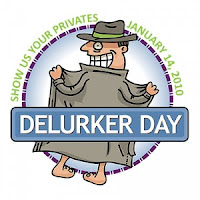 Alright- time to come out. Let me know you visit!

Ever hearing the song My Favorite Things for the rest of my life. Seriously. I can’t stand that song.

Today I was lucky enough to hang out w/ my girlfriend Kirsten. She’s a mom of 4, and her youngest is a month old than my youngest. She’s very down to earth, laid back, and shares similar ideas with me.

I asked her today about kindergarten, because I couldn’t find any information on the cost of it. I had heard from other moms that kindergarten enrichment would cost extra, but that it was necessary (according to those moms). My big concern was whether we could afford to send Elijah to full day kindergarten *and* send Miles to preschool next year.

Kirsten shared with me that one of the teachers she spoke to said that by 1st grade, there was a big difference between kids who did full day kindergarten and those who did not. As a result, Kirsten put her son through the full day, but at the cost of her daughter not going to preschool for a year.

My heart is heavy, because I want both my boys in school next year. I feel that Miles could really use preschool 2 mornings a week. I think it would enhance his speech skills, and he badly wants to go. I worry that Elijah might have a hard time adapting to full day 1st grade if he only goes to kindergarten for half a day.

‘Tis true, it is my birthday.

Having you birthday fall on Monday can seem a little dull. I opened my gifts yesterday so I could enjoy that with my family without people dashing off to work and school. But today I was able to enjoy a birthday nap with my little fellas, and after dinner tonight we went to Coldstone.

I got a lot of lovely gifts, but wanted to share with you what my young sons bought me: 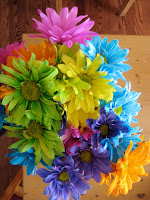 Elijah picked them out himself. He said, I love you and I know you like pretty flowers.