The snowstorm that flew in Tuesday night cancelled school for Elijah on Wednesday. This was the first time he had a snow day, his school usually doesn’t call them. It also meant it cancelled his field trip to the fire station. He didn’t seem too broken up about it, as I assured him that his teacher would try to reschedule.

The ear infections went away on their own, without the need for antibiotics (yay!). We celebrated by taking a trip to the zoo on Friday. We aimed to hit the places we missed on the last visit, namely Bird World and the red panda. The morning was a success, the weather was perfect, and while there were a lot of school groups there, we didn’t feel crowded out. 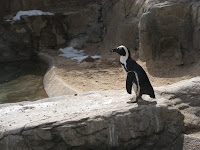 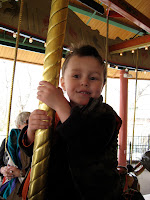 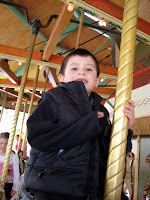 Now that Elijah is officially on Spring Break, I’d like to visit a few other sites in and around town. This week, I’m keen to check out Littleton Historical Museum. I got that tip from my twitter friend @NotAHandBag. I’m taking suggestions from you guys as somewhere else we should visit, preferably someplace cheap.

Now get out and enjoy that spring weather!

I’ve tried to be a laid back kind of mom. I don’t like to call the doctor over every little thing. My kids have been fortunate enough to never visit an emergency room.

But last night when both kids were up several times complaining of ears hurting, I grew mildly concerned. They’ve had a wet cough all week to boot. I checked their temperatures first thing this morning, and they were sitting around 100 degrees.

“Hey Daddy, that water in Miles’ ear must have leaked out some ear wax.”

My kids have never had an ear infections, and I wasn’t sure how to go about treating it. So we took them into the doctor. Both kids have ear infections. Sigh. Well, at least that made the co-pay worthwhile. I hate paying for an appt to be told “They’re fine”. We’ve got ear drops, and antibiotics on standby.

I’m taking tips on how to make the kids more comfortable, if you have any.

Let me begin by saying this post and last night would not have been possible if not for Tracy with Feld Entertainment & Susan from Savvy Source. We were treated to VIP tickets to the show because of the misunderstanding that happened on Wednesday night. Thank you! 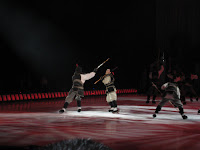 This was my first time seeing Disney On Ice. How did it fair compared to other ice shows I’ve seen? Uh, it was awesome! Take 65 lovable characters from Disney movies like Toy Story, Pinocchio, Aladdin, and Mulan, add some princess/heroines like Cinderella, Pocahontas, Snow White and everyone’s favorite mice Mickey & Minnie and you have a magical evening. The boys loved it! I nearly cried watching Belle & the Beast skate together. I got all giddy when they recreated It’s A Small World. It was beyond wonderful. This was the reaction from the boys: 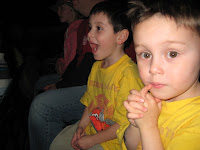 Elijah’s two complaints were
1. It’s too short (what?! It was about 100 minutes or so) and
2. Stitch needs his own story told. Disney-take note!

Miles’ only complaint was where’s Batman? (I told him I don’t think he & Mickey get to hang out much)

This show plays through Sunday here in Denver, at the Coliseum (they have free parking!) and then moves onto Loveland, Colorado next week, followed Colorado Springs. It’s a great evening for the whole family, and I heartily recommend it. Info can be found here: Disney On Ice

When I was younger, my parents used to take me to see the Ice Capades. I loved it. I don’t know if all little girls who grow up in Canada dream of being graceful on ice, but I did. I lacked a lot of skill on skates, but it did not stop me from pretending I was a figure skater. Skating on the outdoor rink, I’d have my walkman blasting my favorite tunes, and I’d close my eyes for brief moments and imagine how wonderful I was.

I won four tickets for us to see Disney On Ice for Wednesday night. I was stoked. Getting to see figure skating live (which I hadn’t done since 1994), and sharing the excitement of the show with my boys filled me with promise. Yes, it’s figure skating, and yes they are boys, but hey it’s Disney! They could watch their favorite characters doing tricks on ice. I was certain they’d love it.

Even Geoff who isn’t a big figure skating fan (or at all), conceded to joining us. It would be a family evening. We drove our car to the train station and waited for it to arrive. We rarely drive downtown, taking the light rail is cheaper. We arrived at Pepsi Center to see an empty parking lot. My stomach sunk. “This can’t be right. Where are the cars?” The closer we got to the entrance we could see the escalators were turned off. The kids complained they were cold, couldn’t we go in? I checked my phone, and when I googled Disney On Ice Denver, it told me tickets could be bought for the show at Denver Coliseum. My heart sunk. How could I have been so mistaken?

It was now ten minutes before the show started. To get back to the car and drive there would take us at least 30 minutes. Miles cried, Elijah was heartbroken, and I felt like a heel. “I wanna see Batman” Miles wailed (he wouldn’t accept that Batman wouldn’t be there). Trying to explain it to the children, while my own heart was aching that we wouldn’t be going to the show… painful. Once we got back to our warm car, I offered them anything they wanted to do. Ice cream! So we drove homeward, heading to the Coldstone near our house.

This morning when I woke, I went back to the website I won the tickets from. On their site, they say Disney On Ice at the Pepsi Center. Knowing the fault wasn’t mine, I didn’t feel as bad.

Someday I’ll get back to the show. And I will get the venue right. And we’ll have a magical time.
***Update!***
My efforts to contact the website were successful, and with a lot of apologies, they are giving us tickets to tonight’s show. The Marketing people for Disney also saw this blogpost and helped arrange this remedy. I am well pleased that this problem was able to be fixed. Thanks! 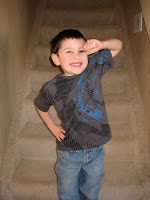 Yesterday my little man Elijah turned five. I didn’t make it on to the blog to wish him a happy birthday.

What a big boy you are, you are turning into such a great young man. We love you and are very proud of you!