Gee, not much to share. Thursday we made it back to the Nature Center. Friday we took a family trip up to Boulder to attend a going away party for someone Geoff knew. That was kinda fun, it was at the place where Geoff goes running in Boulder. He took the boys on a short hike. It was a picnic potluck. When we departed, we had a deer walk out in front of the car. It wasn’t in any danger of us hitting it, thank goodness.

The weekend was pretty laidback. Saturday night, we had both boys in bed by 7pm. Crazy huh? We partied it up by watching a movie. Then once 10:30pm came, Miles was waking up twice an hour until 5am. I don’t know what his issue was, but I fed him at 5, then the two of us slept until 8:30am.

On tap for this week, doctor appointments for Miles and myself. I’ll likely aim to get out to the Nature Center again.

I’m going to close with a quote from Meet The Fockers.

Bernie Focker: Do you want me to be macho wacho?
Greg Focker: Dad, have I ever said the words macho wacho to you?

So, as I mentioned in a previous post, I started an REI wishlist. Friday I sent an email to family letting them know we are planning to take the boys camping next summer, but we lack several camping needs. I heard back from someone and they are buying us the tent and coordinating footprint. How cool is that? That was the biggest item we needed, so now it makes the rest of the stuff more obtainable with gift cards, me thinks. 🙂

We did go up into the mountains yesterday to check out the outlet stores in Silverthorne. Not many good buys to be found, but we did visit The Smiling Moose Deli, and had a delicious lunch. Funny thing is their only Denver location is right across from Geoff’s old hospital. Maybe the sandwich was so good he’ll get his buds together and they’ll take the shuttle there for lunch.

Marian offered to babysit one night for us, so I hope to take her up on it soon. Really all she has to do is hang out here after the kids go to sleep, so she said she’d bring her books to read.

I’m gonna close with a quote from Psych. You’re watching it, because it’s an awesome show!

Shawn: He’s not going to kill us, right? I mean people change. We haven’t seen him since the 5th grade.
Gus: I don’t need to see him Shawn! Some people are just born evil. The kid from the Omen, the Children from the Corn, Chad Michael Murray.

At the beginning of the week, I had some ideas of what I wanted to do. And amazingly enough I got to do them. I went to the gym a few times. Also, we went to the Morrison Nature Center. 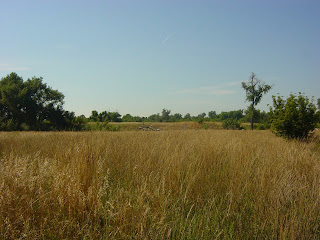 outside the Nature Center 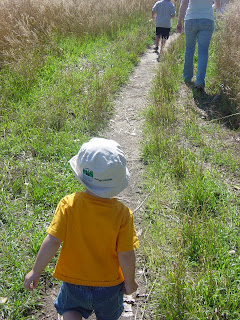 Elijah on the hike

It’s a weekly thing, so I may try to get us there each week. If the timing works out. It’s free, it’s educational, why not right?

This weekend we are aiming to get out to Silverthorne. If I’m lucky I’ll be able to get some early Christmas shopping done at the outlet mall. 131 days until Christmas! Ha ha ha.

I’m going to close with a quote from Peggy Sue Got Married.

Richard Norvik: I would be very careful about this if I were you. What if you fall into the hands of some madman with plans to manipulate your brain?
Peggy Sue: Well, that’s why I was getting a divorce!

But Geoff’s friend Erich is getting married and extended an invite to us. The wedding is in La Jolla/San Diego, and it’s in October. We’d love to go, but we’re still trying to figure out if it is feasible. Obviously it would be a short trip, but the lure of being back in California has set our hearts a-flutter. As soon as something has been decided, I’ll let you know. I do think Geoff will go, even if we all don’t.

Our friend Roland is embarking on a road trip from Arizona, and is going to crash with us one night this week. It will be nice to have company. We haven’t seen him since Chris & Ashley’s wedding in 2004.

Friday I went to the gym and put both the boys in the daycare there. They seemed fine when I came to get them, so I’m thrilled to have that option during the day. Elijah wanted to play in the pool, so Sunday we went swimming as a family. It was surprisingly empty, which was wonderful.

Got some ideas of what I’d like to do this week and on the upcoming weekend but as always we’ll see how it plays out. The boys are always better after they nap, so I have to be flexible.

Watched some Warren Miller film this weekend (I think it was Higher Ground), and Geoff thought this quote was funny, so I’ll close with that.

“Warm beer is infinitely cooler than no beer”

Not much is going on in MelissaWorld. Elijah is having more good days than bad days and Miles is growing bigger every day. Sunday afternoon Amy came over to babysit, and Geoff and I went out. We had planned to see a movie, but as Geoff pointed out, wouldn’t it be nicer to be able to look at each other and talk, rather than stare at a screen? He still owes me a movie, it’s been almost 3 years since we saw one in the theatre.

So we went to Park Meadows Mall, shopped a little and ate some cheesecake at the Cheesecake Factory. I’ve never been before, so I opted for the most chocolately one I could find. After smelling Geoff’s espresso, I wished I had gotten a coffee too. We left the mall and went over to REI. I have set up a wishlist, and it’s my hope we’ll get enough gift cards/money to buy a tent for camping next summer. (If you missed this subtle hint, I’ll be sending out an email about it soon).

I finished reading another book, The Lovely Bones (Alice Sebold). It was good, but pretty depressing. It is slated to be made into a movie by Peter Jackson, and I’m not really sure how it’s going to translate to the big screen. But they have a pretty good cast lined up.

Mike: Look at the big jerk. He ruined my life, and for what? A STUPID KID! Because of you, I am stuck in this frozen wasteland!
Yeti: Wasteland? I think you mean “Wonderland”! I mean, how about all this fabulous snow, huh? Oh, and wait until you see the local village, cutest thing in the world. I haven’t mentioned all the free yak’s milk.
Sulley: Wh… What did you say?
Yeti: Yak’s milk. Milking a yak isn’t exactly a picnic; but once you pick the hairs out, it’s very nutritious.