I’m here, I just haven’t had anything blogworthy to write about. Which I take as a blessing. Too many people I know are stressed, depressed, or dealing with newborns. And I go about my quiet life, thankful for the quiet. Have to say honestly, that all these new babies & pregnancies stir feelings in me. Then I remember I still have two in diapers, and the feeling passes. 🙂

September was okay, but October is what I am excited for. It means seeing Chad & Khara again, bible study starting up again, running on a relay team for the Denver Marathon, and my in-laws are coming to visit!

Everyone has been pretty healthy this fall (thus far), the weather has been awesome, and I’m even finding time to read again. I have travel fever pretty bad, and no money to soothe it. I’ve got a good start on my Christmas shopping, or least laid out what I plan to buy (which is also hindered by lack of money).

I’ll be oh so happy once the stupid election is over. I’m not even sure what I would do if I could vote. Neither candidate seems to have my issues at heart. Too bad I’m not stupid, then I could be swayed by what some celebrity tells me I should do. All the country’s problems solved! I am mildly concerned about the money market problems, but it’s hard for me to see how I’m affected (although Geoff says our retirement stuff isn’t doing so hot).

I suppose I’ll close now with a quote from Fringe.

Peter: Something on your mind?
Walter: Please. The term “on your mind” vexes me with its depictive inaccuracy. 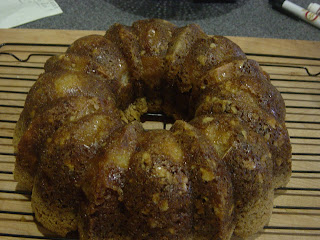 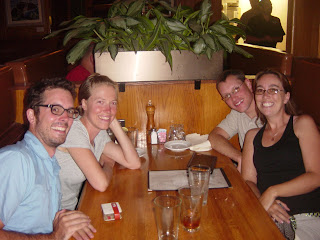 Dinner at Wynkoop with the Pauleys

Last night, Geoff & I were able to enjoy dinner at one of the restaurant staples of LoDo (Lower Downtown). We met Ryan & Milena (in town on their honeymoon) at Wynkoop Brewing Co. The atmosphere is nice, the food was awesome, and Geoff said he had the best IPA he’s ever tasted. It’s been maybe 6 years since I saw Ryan, who is a friend from my KUCI days. His wife Milena is cool too, and today they head back to Houston to survey the damage to their home. They know for certain that they will have lost all the food in their fridge, but hope that’s the worst of their worries.

It’s hard to believe we’ve lived here for 5 years, and have only eaten downtown maybe three times. I’m sure there are a ton of great places, so we hope to tap into that more often. We took the train downtown, because it’s cheaper and easier than parking there. The only issue is it adds on more travel time (curse of living in the ‘burbs). So while we left LoDo around 10, we didn’t get back to the sitter’s (awesome Amy, Jerry & their kids) until after 11. Elijah was still wide awake, and NOT willing to go home, much less go to bed. Miles eventually crashed at 10:30. I’m gonna owe Amy big time!

Tonight, I’m heading back downtown to go to Women Of Faith with some girls from church. It’s all day Saturday as well. I hadn’t originally planned to go, but Kim got such a good deal on tickets, I thought I’d take advantage of that.

In tv land, I started watching Fringe, which got the lucky timeslot after House. Fringe is right up the X-Files alley, if you dug that, you’ll probably like it too. I’m happy House has returned, since Psych & Burn Notice are done their run until January.

I’ll close with a quote from this week’s House premiere.

Thirteen: This is Dr. House. He’s too brilliant for introductions.

Making my family listen to some Motown in honor of Papa’s birthday. He would have been 58 today.

Fall is certainly here. We have cooler weather, which is a relief after a hot summer. Elijah is in preschool two mornings a week, and he seems to enjoy it.

Geoff is off this weekend helping his buddy run a 100 mile race. I hope it doesn’t inspire him to take on such a crazy adventure.

I don’t have much going on. I’m trying to get my health on track, as well as make time to work out, and read. My Beth Moore study for the fall does not yet have a start date, but I am going to Women Of Faith in two weeks. Our group got so tight this summer, we are almost desperate to stay in touch with each other. It’s awesome. As my friend Amy said, it’s better than a sorority.

Elijah has made me watch Madagascar twice in the last 12 hours. So I’ll close with a quote from that.

Marty the Zebra: Alex, do not interrupt me when I’m daydreaming. If a zebra’s in the zone, leave him alone.