It’s a little weird for me to think I’m the mother of two children. I’m working on blogging the birth story, trying to rest when I can, and email people who haven’t heard the news.

Everything is going alright thus far. My body hurts (understandably), and I’m working on trying to have extra grace and patience for the boys & man in my life. It’s an adjustment for everyone. Well maybe not Honey Cat, not yet anyways.

Today we walked a little at Southlands, mostly for the fresh air. Tomorrow we have to go to the pediatrician and possibly to AAA to test drive a Vue.

I’ll be watching the Oscars tonight, but it’s not a big deal to me. I may not stay awake for all of it, sleep is a precious thing you know.

I’ll close with a quote from 50 First Dates.

Maybe you should head over to the Little Legume blog…

First off, this post isn’t directed at any one person. It’s the result of several tiny things that accumulated into me wanting to hide away and shut out the world.

Yes, I’m still pregnant. Yes, I was due last week. This is why we haven’t called people to tell them about the birth. There hasn’t been a birth to tell about. I don’t have the answers you want, and when you ask me why this or why that, it hurts me. Do you people really think we’d have a baby and not tell you?

I’m overly emotional. I’m pregnant. I want to have this baby, and I wanted to have had it by now. But I can’t control the timing of this delivery (at this point). I’m healthy (except for being stressed out), and the baby is healthy too.

All I ask is for you to keep us in your prayers, and join us in being patient. I don’t really want to talk much more about it other than that. Trust us, when he arrives, we’ll let you know.

Just wanted to save y’all from emailing me and asking me what’s going on.

Nothing. Just waiting on the baby come. 🙁

These are two things that made my day:

House is being renewed for season 4!

We saved up our American Express points and bought a food processor! 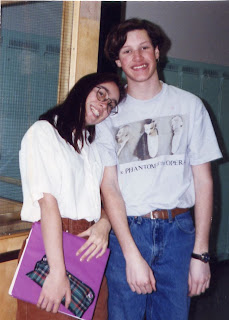 I don’t think these two kids thought they’d be where they are today. I love you Geoff! 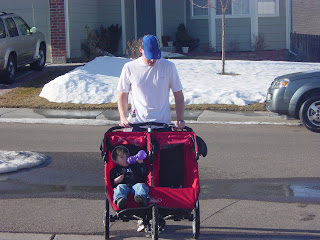 The boys returning from their run Saturday in the new double joggy stroller. 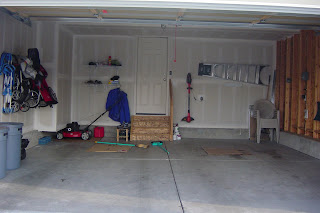 Sunday we took a trip to Home Depot to buy some hooks and a broom to organize and clean our garage. Since we will be getting a 2nd car PDQ, we needed to make room for it. Now anyone who has seen our garage will tell you, it wasn’t that bad to start with. I think that made the job go quickly. I, for one, love the look of a clean room, and am well pleased with Geoff’s work. I am also pleased we were able to take 5 bags of stuff to Goodwill yesterday as well.

Last night we enjoyed dinner out at the Macaroni Grill as an early anniversary celebration. Amy, Shaun & Caley came over to play with Elijah. We may still do something else to mark the occasion of our 10th anniversary in the future. As my friend Kirsten pointed out, your 10th is always hard to celebrate because you are usually in the throws of children, and bills, and who knows what else! 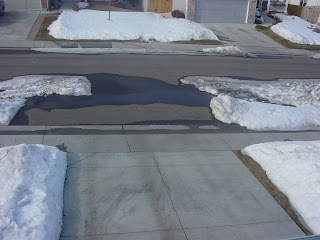 This is what a week of melting looks like. Still no sign of new snow, but the forecasters are saying all next week there could be snow. Who cares at this point, we have our street back, and as Geoff says now we have a place to put the snow.

We traveled up to Boulder this morning, and I have now officially been to every Peet’s in Colorado! The Boulder store is very nice (much like the one in CA you took me to Cate). We then did a stroll down the 29th Street Mall, which has a lot of the same stores as Southlands. It was just so nice outside, we wanted to spend it outside as a family.

We’ve made plans to go out to dinner tomorrow night to celebrate our tenth anniversary (which is on the 15th). We’re going to the Macaroni Grill, which we haven’t been back to since Elijah was very small.

This week didn’t hold much stuff going on. Watched some good tv, House, Lost, Scrubs, Psych. Just waiting on the baby to arrive. Lisa will be here in less than 3 weeks, and my mom is coming a few weeks after that.

I’m gonna close with a quote from Hope Floats.

Birdee Pruitt: Childhood is what you spend the rest of your life trying to overcome. That’s what momma always says. She says that beginnings are scary, endings are usually sad, but it’s the middle that counts the most. Try to remember that when you find yourself at a new beginning. Just give hope a chance to float up. And it will…

Yesterday was such a lovely day, and just watching the snow melt away, I felt like my snow sadness was melting away too. The promise of snow this coming weekend can’t damper the fact that we have a lot of pavement showing on our street. 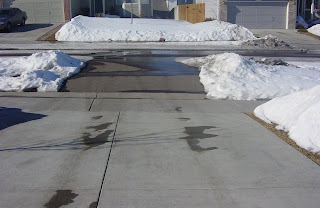 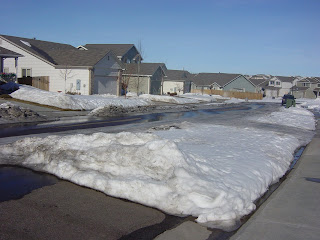 We’re expecting a full week of sun, and snow to come on Friday. But I don’t care, because the sun has indeed returned. This is what it is supposed to be like. Now all I need is to not go into labor while it’s snowing.

After a three week hiatus from church, it was nice to go back. Elijah has moved up into the two year old room, because he’s too big for the nursery. Following church, we took in a family swim at the Trails. Amy, Shaun & Caley came over to watch the Superbowl and we ordered pizza. But Amy & I did duck out before the game to get some kid-less time at Caribou. Overall, it was a quiet weekend.

This week, I don’t have much going on. A doctor appt on Thursday, but that’s it.

I’ll close with a quote from Reality Bites.

Lelaina Pierce: Hey Sammy, what’s your goal?
Sammy: My goal is… I’d like a career or something.

Have a fabulous year!