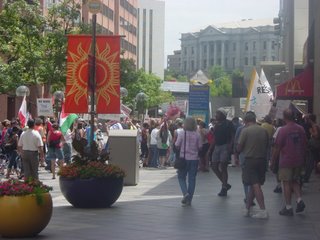 The protesters who hi-jacked our fun afternoon.

I picked Amy around 9:45am, and we headed to downtown Denver. We parked near the Denver Art Museum (DAM) and made our way through the construction to go inside. They are currently building a huge new building, in a very odd shape. It should be interesting to see it when it is completed. They had a giant sculpture of a brush and dust pan outside (sorry, I meant to take a picture of it, I forgot). Having never been to DAM, I was excited, and then promptly disappointed. Only the first floor was open, and it was all art about the construction. The highlight of the museum was the bathroom sink. Seriously. When you go to wash your hands, the sinks sings to you.

We left and headed towards the 16th Street Mall & LoDo. While we were passing city hall, there was a protest rally going on. We couldn’t really tell what their stance was, there were many signs, and the speaker was very dull. We moved past that and we on 16th street when I convinced Amy we needed to get milkshakes at Johnny Rockets. We sat on the patio, and even order some food with our milkshakes. Just as we were finishing up, here came the protesters. Now it was clear by their chanting what they were there for. “yay Lebanon. boo Israel. yay Hezbollah”. Suddenly we didn’t feel much like being near them, so we paid and tried to get away from the scene. One man was removed by police from the mob, he was carrying an Israel flag and a sign that read “Hezbollah killed U.S. Marines”. I guess the police felt he needed to be protected. We tried to keep in front of the them, ducking into shops we wanted to see. Every time we’d exit, they were there. It was starting to get on our nerves. We eventually hopped on the free shuttle and took it to the Tattered Cover. I don’t like that location as much as the old Cherry Creek one, but any Tattered Cover is a good one. 🙂 We took the shuttle back towards the museum, and that’s when I decided I need to snap a picture of the protest for the blog. You might not be able to see it, but they were turning to the right in front of us, so we went straight to skirt around them. We saw the one anti- Hezbollah guy again, he was following behind them. I heard him say he had at least 20 people tell him they appreciated his sign.

So that was my Saturday, my free day to go girl stuff. Amy suggested next time we go get pedicures. We decided since our nice Saturday was hi-jacked, our hubbies should let us have another go at it.