Elijah must have Daddy’s holiday spirit, because the last two weeks he’s been asking when we can get a Christmas tree. Those who don’t know, I’m married to a loony who sings Christmas songs year round. God bless him, he’s a good man, I can’t help but love him (looniness and all).

It’s official, Kevin & Alison are moving here! They’ll pack up their life in SoCal and move here in November. 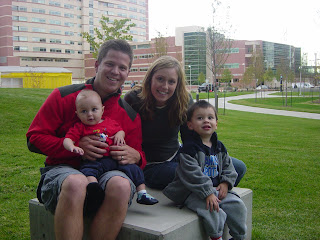 A new store opened up at Southlands, The Cookie Company. So I went to check it out yesterday, buying 4 cookies in an attempt to get an idea of what they offer. The lady even threw in 3 day olds for free. They were all tasty, so I will definitely go back, as well as hype it to the locals. The store originated in Nebraska, this is it’s first location outside of that state.

In tv news, Psych is done until January, Burn Notice isn’t coming back until next summer, and House is back on Tuesday. The BN finale was really good, it’s going to be a long wait. If you didn’t see it this season, you should try and catch the show. I think Mike would like it, it co-stars an actor he likes, Bruce Campbell. But mostly people watch it for Jeffrey Donovon who is awesome (and easy on the eyes)

I’ll close with a quote from Burn Notice.

Sam: Here ya go, Doug: my lucky vest.
Michael: It’ll look great over my shirt.
Doug: Thanks.
Sam: It’s a little worn, but it’ll do the trick.
Doug: Are these bullet holes?
Sam: Yeah, I broke it in for ya