We had a nice hot weekend here. Saturday, we didn’t make it to the railroad museum. Miles ended up sleeping until 8am, which was when we planned to depart. So instead we went to the local fire station for their open house. 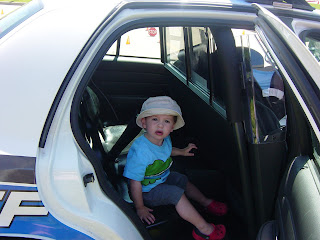 Back of the police car 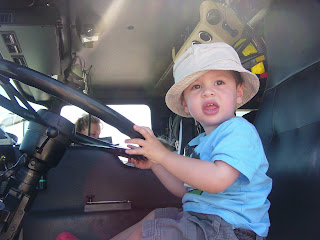 Sunday I got a nap while the boys ran.

I’m hoping Miles will start napping more than cat naps so I can start working on some projects. Specifically his Christmas stocking.

Speaking of projects, Geoff & Glen put up a fan in Elijah’s room. Yeah, I figured Glen didn’t do enough projects at all his other houses, he needed to help Geoff with one on his vacation. I’m being sarcastic. 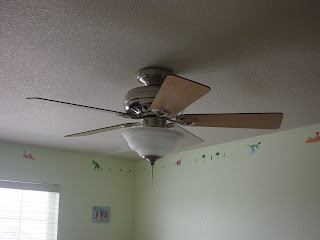 Yesterday was a particularly hard day being a mom to a toddler. I wasn’t sure I was going to get out to do errands with the way he was behaving. Wouldn’t you know it, I ran into Amy & Caley at Target. So we chatted and grabbed a coffee. Then we went back to Amy’s for the kids to run and around get out some energy.

Colin’s surgery went alright, and he thinks he’ll be back at work on Monday. They had to remove all the cartilage from his knee. But the whole family is stoked about the California trip. It means so much to me that he’s choosing to spend his vacation to see us.

Jen & Greg will be here in a little over 2 weeks. I heard Jen was gloating she’ll be the first Californian to meet Miles.

Well, that’s all I got going on. I’ll close with a quote from Mr. Deeds.

John McEnroe: I like the way you beat up those guys who were making fun of you. It was pretty cool.
Longfellow Deeds: Yeah I bet you know what it’s like to get all riled up Johnny Mac.
John McEnroe: That I do.