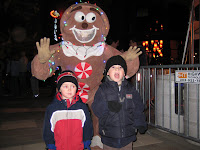 We live in SE Aurora, and our nearest shopping area, Southlands, touts themselves as being a place of community. They even have a Main Street. Whether they think they truly accomplish this community feel, I’m not sure. They certainly have some work to do to achieve that.

Last night we went down there to check out their Christmas tree lighting and parade. They had a decent crowd, and the entertainment was alright. The emcee announced the parade would start in a few minutes, so we scoped out a place to check it out. After a few minutes, we opted to move closer to the start of the parade, and closer to where we parked. Though the parade had allegedly started, we were able to make it right to the beginning of the route, and there was no movement. We stood there for at least 10 minutes before the parade started.

Let me preface that I’m using the word parade loosely. By definition: a series of people or things appearing or being displayed one after. Okay, you had that. But with less than 10 groups in this parade, you would think it could

A: start on time!
and
B: not have such big gaps between the acts.

It was pretty chilly out there, and even though the kids were bundled, they still complained of being cold. Not nearly as much as Mom & Dad complained, but still.

We did not stick around for the tree lighting. With the way they were running their schedule, we figured we were in for more waiting. Next year, if it starts at 6pm, we’ll go at 6:30. It will (hopefully) eliminate the waiting around for things to start.