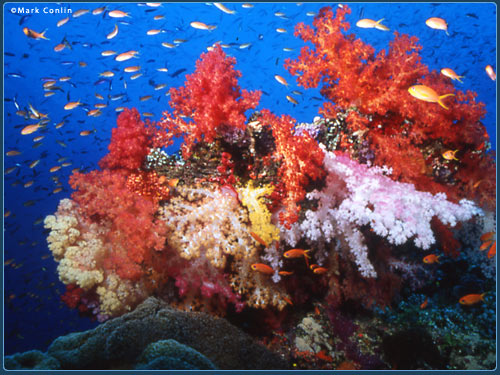 We saw the new IMAX movie Coral Reef Adventure last night. It was really good. It made Geoff pine for the ocean though. It wasn’t as busy as I expected at the museum last night for members night. We pretty much had all of Space Odyssey to ourselves. It was so beautiful here yesterday, I was able to walk around in just a t-shirt. And I had no hassles at the bank depositing a Canadian cheque. Usually it’s a long process, as they don’t know what to do. But I called in advance to make sure there would be someone who knew what they were doing.

I had the strangest dreams last night. First let me say, I almost always remember what I dream, though I never remember how they start, I can sometimes remember how they end. Okay the first dream I was part of a security guard team at a school. And John Cusack was one too, and I think he was kinda sweet on me. But I didn’t have time to ask him about it because there was a Code 4. We meant that an animal had gotten out of it’s cage. Yeah, there was a zoo at the school (don’t ask). So I’m yelling in my walkie-talkie clear that area. I get to the scene, and the Yeti has jumped over his cage, and is in the wolf habitat. Seems that the wolf stole the Yeti’s baby, and now they are fighting. So I enter the habitat to try to find where the wolf hid the baby. And try not to get killed. I’m climbing all over rocks and stuff. It ends at some point, but I think I may have been successful.

Next dream, I’m on a school bus, heading out on a school trip. An end of the year celebration, and we’re going to an amusement park. It kind of looks like Six Flags. The bus isn’t very full, and everyone seems to have musical instruments. The guy in the seat in front of me has a recorder. We get the park, and we file right into a line for a roller coaster. I claim I’ve been on it before and it’s scary, but I like the feeling of being scared. I sit in the car, and the next person in line may or may not have been this guy Aaron I knew in grade nine. He looked like him, I think. Anyways, he moves to the next seat, and I ask “aren’t you going to sit with me?” He says no, he wants to sit with his friend. But I tell him he has to sit with me because this ride scares me, and I can’t ride alone. So he sits with me. The ride starts, and now there must be two of me, because I’m on the platform watching the roller coaster go. I tell the people on the platform, “if you listen, you can hear me screaming”. I see the coaster go upside down, and I know I must be freaking out, because I hate rides that go upside down. Once it had finished one lap, it stops to let me off because I won’t stop screaming. I walk towards myself, and one of us is saying something I always say “I don’t go on rides where the floor drops and I’m stuck against a wall, if it goes too fast, or if it goes upside down.”

Now I’m in a different part of the park, and everyone wants to go on some ride that looks dumb to me. So I pass. Then I come across a skit of sorts going on. They want me to play along, and I have to solve some mystery. They keep following me, until I solve it, and then I ditch them. I’m walking, and I look beside me to see Dave Glasel walking with me. I ask him what we should do. He says let’s get a deck of cards and play. I tell him “we haven’t played cards together since…” and I’m trying to recall, but it seems forever ago. I wake up, and the alarm is going to go off in a minute.

I don’t really give much thought as to why I dream what I do. I find most of the time, like last night, it’s jibberish.

Dr. Wong: Lloyd, what do you think about the dream?

Lloyd: I think she should stop telling it at dinner parties to all our friends.

So you didn’t think that’s what you’d get when started reading this, huh? 🙂 I got some movies out of the library to watch, Confessions Of A Dangerous Mind, Gross Anatomy (which I’ve seen before), & Murder By Numbers. I also am going to pick up Family Guy Season 3 today. It’s suppose to rain today, so I’m going to get on my errands before that makes the roads slick. I’ll take rain over snow. Work yesterday was good, busy.

I’ll sign off and end with a quote from Scrubs:

[The Janitor and Troy stand over J.D.’s mangled bike, a crowbar and a bat in hand.]

Janitor: It’s a riddle! Two guys destroyed your bike with a crowbar and a bat. One of ’em wasn’t me!