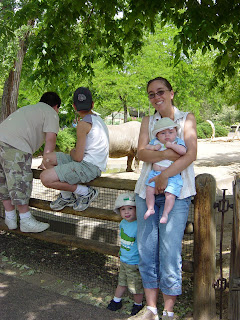 Took the boys to the zoo today with Amy & Caley. Man it was busy. We spent 3 hours there. Elijah liked the polar bears best I think. My favorite part? When a zoo worker instructed us to get inside the nearest shelter because an animal was on the loose. For ten to fifteen minutes we were holed up in a snack shop. The couple next to us could see there was a commotion, but couldn’t see more than that. Once we were allowed to leave, we inquired, who broke out, and were told it was a giraffe. We later heard it was simply a drill, that they conduct them a few times a month. Well, it was exciting while I thought it was real. 🙂 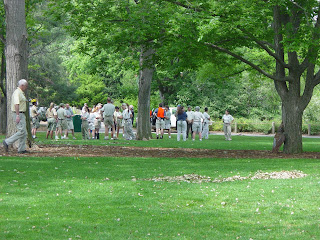 Here’s the group of zoo workers after the “incident”. You can’t see it in the picture, but some of them are holding guns.

The zoo is a 45 minute drive from our house, so we really only go on free days, or when someone is in town and wants to go. Today we just wanted to go, so I bought a ticket. Once Elijah stops being free (age 3) perhaps we’ll look into getting passes.

I’m super stoked that Jen & Greg are going to be here in a few days. I know the boys will get a kick out of having them here.

Watching The Soup a few weeks ago, Joel had a funny quote from Cameron Diaz, so I’ll close with that.

“When Paris suffers, we all suffer.”