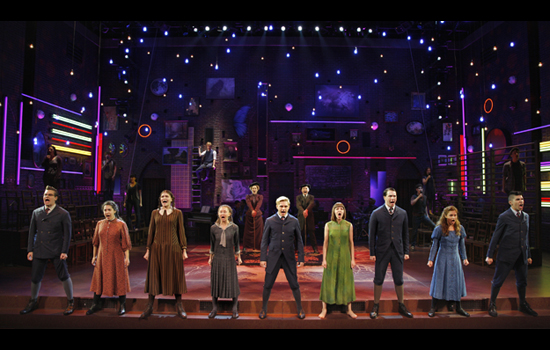 I was fortunate enough to go see the production Spring Awakening on opening night here in Denver. I was completely blown away!

The Buell Theatre in Downtown Denver is a lovely performing area. The stage was fairly sparse, save for some bleachers and chairs. Some lucky audience members were seated in the bleachers, making me wonder what the show would be like from that perspective. The back wall was adorned with mirrors, photographs and artwork. Also at the back of the stage was the band.

It was a pretty full house and then the cast took the stage. Those actors not in the scene sat on the bleachers, interspersed with the audience. The voices rang out and the energy from the performers let me know I was in for a real treat.

The music was likely my favorite part of the whole show. The rock songs took this play and gave it life. A play about sexually charged youth, filled with angst and confusion, I felt like I was going through their pain with them. Everyone was wonderful, but Moritz really shined (in mine & Geoff’s opinion). When Moritz sang, “I don’t do sadness”, I was able to reflect back on how I felt as a teenager.

The other part of the show that had me captivated was the lighting. That may sound weird to you, but for me it helped convey the emotions of the music & scene.

I would totally go see this musical again in a heartbeat. While there were a few moments that made me uncomfortable, there was nothing offensive in it. I think one of the goals of the people involved with this project was to use the musical as a catalyst to get parents & teens talking. While these youth were surrounded by adults unwilling to address the realities of being hormonal teens, we (parents, teachers & clergy) need to be available as a safe place to come to with concerns. If I walk away from seeing this with at least being that kind of parent to my boys, then maybe I can save them some of the heartache that comes with growing up.